Four and a half years after the Umbrella Revolution, the Hong Kong government is facing another Special-Administrative-Region-wide (Hong Kong is technically not recognized as a country) revolution on the extradition law proposed in early 2019, the Anti-Extradition Law Amendment Bill movement. 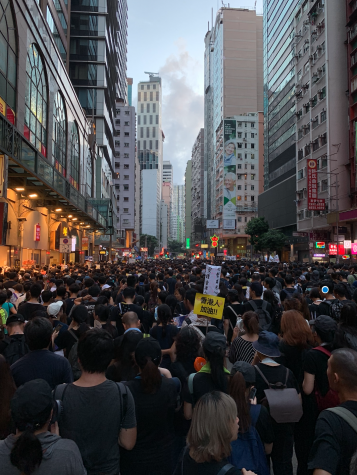 The Fugitive Offenders and Mutual Legal Assistance in Criminal Matters Legislation (Amendment) Bill was proposed in response to the 2018 murder of Poon Hiu-wing by her boyfriend Chan Tong-kai in Taiwan, where the two Hong Kong residents were visiting as tourists. If the bill were to be passed, the Hong Kong government would gain the right to extradite fugitives in Hong Kong to the mainland government.

A series of protests began as Hong Kong citizens feared that the bill would undermine the sovereignty of Hong Kong as a SAR under the system “one country, two systems” created by Deng Xiaoping. In theory, any number of political refugees and enemies could be extradited under a series of vague Chinese laws.

The Hong Kong government would no longer be able to ensure the independence of its citizens from the Chinese government, gradually moving towards a single-system government fully controlled by China.

Having lived in both mainland China and Hong Kong, I have people around me telling different stories about this protest. This leads to a question: Are the Chinese hearing accurate stories?

As one might know, the Chinese government maintains censorship over all media capable of reaching a wide audience, including television broadcast, news websites, and even mobile social applications such as WeChat and TikTok. Many key foreign websites including Google, Facebook and Twitter are strictly inaccessible without the help of VPN (virtual private networks). Recently, even VPNs are being banned.

Most of the protests since the June 9th demonstration have been peaceful, decentralized, and self-organized marches. But what the mainland Chinese people see is a whole different story.

After surfing a little bit in some of the Chinese websites like Baidu, Sina and Weibo, there was an astonishingly lack of information on the Hong Kong protest. The only related posts are ones that depict the protests as extremely violent, either showing either police officers, or citizens getting beaten up by a crowd.

Not only has the Chinese state media portrayed extremely violent protests, they have also gone as far as accusing the protests of being plotted by “foreign hostile forces,” including House Speaker Nancy Pelosi and the CIA.

Apart from news, there are three main ways Chinese people can access information about the outside world – WeChat, Weibo, and the newly risen TikTok. As the Chinese government felt the protests threatening their sovereignty in Hong Kong, information regarding the protests have been taken down from these sources, greatly limiting Chinese citizens to have a comprehensive understanding of this event. Ahead of the 70th anniversary of the founding of modern China, all VPN services, apps that typically allow users to bypass Chinese firewalls, were completely shut down to avoid the spread of negative press.

If you are a regular user of TikTok (a platform where users post videos), you would notice that there are no videos about the protests at all, as if they never happened. WeChat, the most used application in China, is constantly under the surveillance of the government, which censors pictures and videos about the protests. This censorship is even happening to WeChat users outside of mainland China who can usually maintain their freedom of speech.

China’s propaganda system not only censors information, but it also proactively produces and disseminates information. The Chinese media is very supportive of nationalistic posts which shapes the situation in a way that makes Hong Kong seem like  it needs to be saved from protests by China .

By cherry-picking information, occasionally dramatizing cases, and even fabricating fake news, the Chinese citizens are not given a full perspective on the event. Blinded by the media, people are inclined to hold an opposing attitude towards Hong Kong without even knowing the accurate full story.

Will the Chinese government ever stop censoring information? Very unlikely. But as more Chinese citizens realize how incomplete their knowledge of the protests are, fact-checking has grown popular. This could be the first step for more accurate stories to be told, opening up the secrets that the government has been hiding, or this could just be another rock thrown in the sea, disappearing as the waves calm down. Only time will tell.