Green and Gray • May 25, 2021 • https://berkshiregreenandgray.org/759/arts/compose-a-new-chapter-the-songwriting-and-digital-music-showcase/ 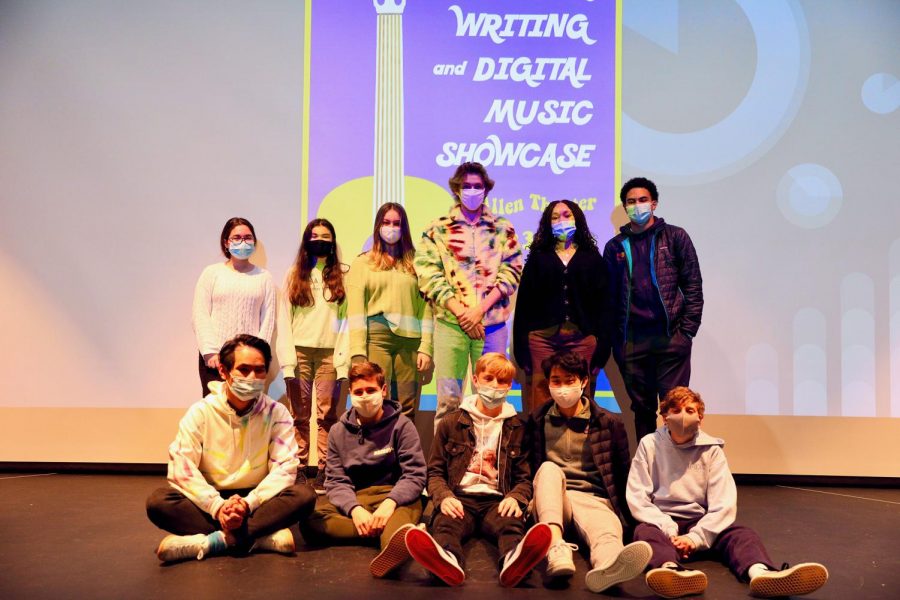 On Friday, April 16, the Berkshire School music department presented the first ever  Songwriting and Digital music showcase in Allen Theater.

Featuring six original songs and eight digital music compositions, the showcase was the first music event this quarter. Although these songs couldn’t be performed live due to COVID regulations, the showcase was still a remarkable success with a full house. It kicked off an eventful spring packed with performances.

Taking advantage of the advanced speaker system in Allen Theater, the showcase played each song and digital music piece with the best quality. Before each song was played, the composer/songwriter went up to the stage to introduce their compositions, explaining the title as well as the inspiration behind their crafts. For songwriters, many explained the meaning behind the lyrics, while digital music composers generally shared their production techniques and software used in the process. Some of the composers were virtual learners, so they submitted a video of their introductions.

Although Berkshire has multiple annual musical events, including concerts like the Vocal Cabaret and Capriccio, the songwriting showcase is something new. It serves as an opportunity for students to share and exchange their original works. Some of the songs were stripped-down acoustic demos, while others were professionally produced and mixed. It is a concert that truly emphasizes on the originality of the music and exhibits musicians’ talents as both performers and creators.

According to music directors Dr. Tasia Wu and Dr. Clive Davis, who put together this event, the songwriting concert is held in the hope to “foster a culture of writing/creating music in any form in our school.” Both graduated with a composition major, and Dr. Wu and Dr. Davis appreciate the process of making music. They would like students to be brave in sharing their ideas, presenting them with music, and promoting their products to the community.

The concert was also designed to be open to everyone, regardless of what genres of music students produce. There wasn’t an audition, and the music department started advertising this event at the end of February so that students could use the spring break to prepare their music. The music department also provided technical support for anyone with their composition process.

In the end, both the songwriters and the audience enjoyed the concert. The recordings of the music premiered at the concert can be found at https://www.berkshireschool.org/arts/performing-arts/music/song-writing-digital-music-showcase.