Jeff Bezos’s announcement of his resignation from his position as CEO of Amazon on February 2nd left shock waves throughout the industry. After establishing the company in his garage near Seattle in 1994 and growing it to the behemoth it is today, Bezos has decided to name Andy Jassy as his successor as Amazon CEO. Jassy joined the Amazon team three years after its launch and has been an integral member since, having created both Amazon Music and Amazon Web Services.

Considering his seemingly unexpected resignation, Bezos admits in his resignation letter that he is eager to challenge himself and further dedicate his time to his other foundations and companies including the Bezos Day One Fund, the Blue Origin Space company, and the Bezos Earth Fund for the good of the future global community. Let’s take a closer look at some of these organizations.

The Bezos Day One fund is a nonprofit organization that supports homeless families and establishes nonprofitable educational institutions in low-income communities. This organization provides annual leadership awards to organizations and civic groups who are committed to offer shelter and support impoverished families who are enduring famine. The Bezos Day One Fund also offers full scholarships to Montessori style preschools in low-income communities.

In addition to the Bezos Day One Fund, Jeff Bezos also wants to focus on Blue Origin, likely because he wants to compete with Elon Musk’s SpaceX to launch NASA astronauts in 2024. Blue Origin is an aerospace manufacturing company and spaceflight company that Bezos has owned since 2000. His goal for the company is to create spacecraft for traveling at a more reasonable price, making it more accessible. According to an interview in 2018 conducted by German media company Axel Springer, Bezos said that Blue Origin is one of his “most important work[s].”

Furthermore, Jeff Bezos provided a 10 billion dollar donation to establish the Bezos Earth Fund in 2020. This foundation supports scientists, activists, and charities who have dedicated themselves to working on climate change issues. This fund joins The Solutions Project, another organization that supports climate changemakers, innovators, and solutionaries at the grassroots level.

Upon closer inspection of Jeff Bezos’s resignation letter, it is clear that he is not leaving Amazon for retirement purposes, but instead to focus on global issues that people are facing today. We should expect to keep hearing Bezos’s name in the news in the coming years, as he continues his work with the Bezos Day One Fund, Blue Origin, and the Bezos Earth Fund. It is not the end of the road for this billionaire. 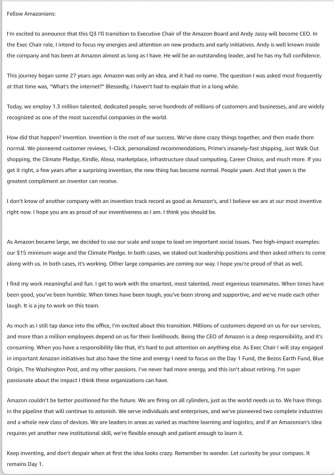