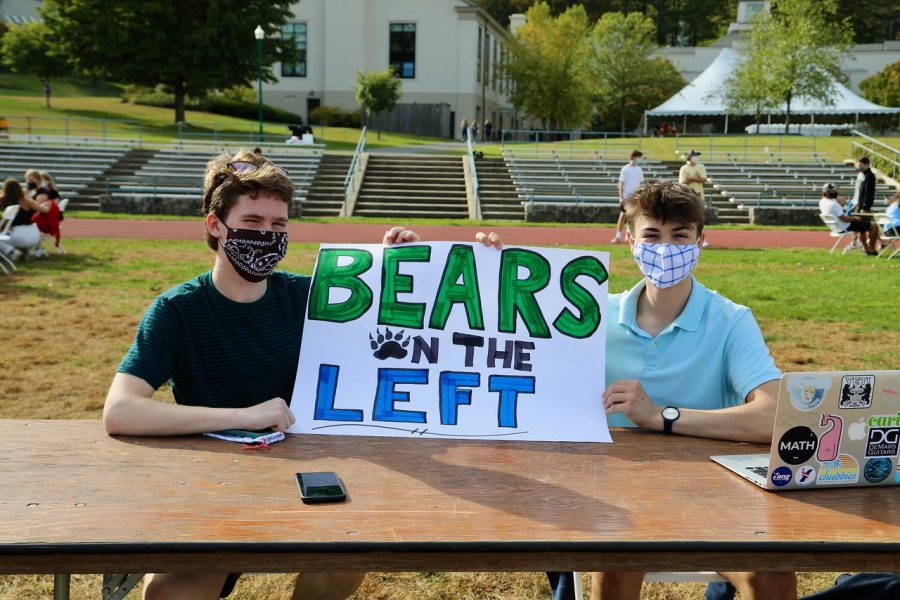 During this election season, political clubs play an important role on campus, and the Bears on the Left and Young Republicans clubs are doing their best to promote conversation and sharing of ideas. I talked to Anthony Ierna ’21, a leader of the Young Republicans, and Ellis DeMars ’21, a leader of the Bears on the Left, about what their clubs are doing this year.

The leaders of both clubs discussed a desire to create a safe space on campus to discuss politics. Since this election is so contentious, many students have expressed that they feel uncomfortable sharing their opinions on campus. Ierna explained that some members of his club “fear being labeled by the general public for their fundamental political views.”

Berkshire has taken steps to try to prevent this judgment and division. One weekend, several groups presented on some issues fundamental to the 2020 election, including members of classes such as AP Government, Leadership Studies, and Race, Class, and Gender, as well as volunteers from a group of students working with Mr. Splawn on issues surrounding the election. There were a few initial presentations to the whole school, and then breakout rooms to discuss more specific issues.

The goal of these presentations was to teach students about some of the most important issues in the upcoming election, with the hopes that this would lead to more accurate and educated political discussions. The school’s core values were stressed, and students were told that all opinions were welcomed as long as they didn’t conflict with someone’s humanity or identity.

The club leaders disagreed on how effective these meetings were. DeMars explained that he believed the discussions were “beneficial for students and faculty to grow as critical thinkers,” and he was “lucky enough to lead a discussion on the effects of climate change and some current legislation in the works” with Phoebe Mulder ’20. He added that his group had some insightful discussions. The one caveat was that he wished there was more time for the conversations to continue.

On the other hand, Ierna thought that while the initial presentations to the entire school went well, “the breakout groups were not productive in any way,” and members of the Young Republicans Club hope that next time, the topics could be explored more thoroughly. Despite the background work and research that went into the presentations, he thought that “leaders were underprepared” and “some questionable statements were presented.”

The club feels similarly about support from the school. While they appreciate that they can discuss political topics in a safe space, Ierna stated that he wished the school would do more to support them: “The Young Republicans Club is one of the only clubs on campus that does not have a faculty member associated with it. While there may have been a willing faculty member, we believe that the climate of the school is not all that welcoming to an adult aiding in the organizing of our club.”

Kevan Bowler explained that he was the faculty advisor two years ago, and he was willing and open to continue in that role, but leaders of the club “never followed up with me about any meetings,” and communication with the club ended after he was initially asked to be the advisor again at the beginning of this year. The club leaders do not plan on following up as of the time of this article. Bears on the Left does have a faculty advisor, George Stetson, although DeMars told me that the club is entirely student-run, and Dr. Stetson’s role was primarily to get the club started.

Both clubs want to aid Berkshire in lessening division. DeMars told me that he and Hynes called the club Bears on the Left instead of naming a political party because they wanted to “prioritize policy and values over partisanship,” and that the club was open to members from across the political spectrum for debate.

For their part, the Young Republicans have been making “a conscious effort to present all sides of political issues [so that members of the club] are able to formulate opinions that are considerate of the facts.” Ierna also believes that it would be productive to have discussions with students with different political associations.

This election is one of the most important in recent history, and with that comes a lot of fear, but DeMars and Ierna hope that the school will be able to stay unified and respectful throughout this time. DeMars stated that he hopes the community can “put the core values of Berkshire before your own political views. It goes without saying that when we find out the results of the election, there will be some students who will be very happy, some very sad, and some who don’t care either way, and our community must allow time for conversation.”

Ierna echoed this idea. He hopes that the community “will be able to take the result of this election maturely and responsibly” and “avoid impulsive reactions that could be harmful to others and their opinions.”

Even after the election, these clubs will continue this work, as will Mr. Splawn and the Election Committee, and we look forward to seeing what they will accomplish over the course of this year.