BLASTing into the Fall 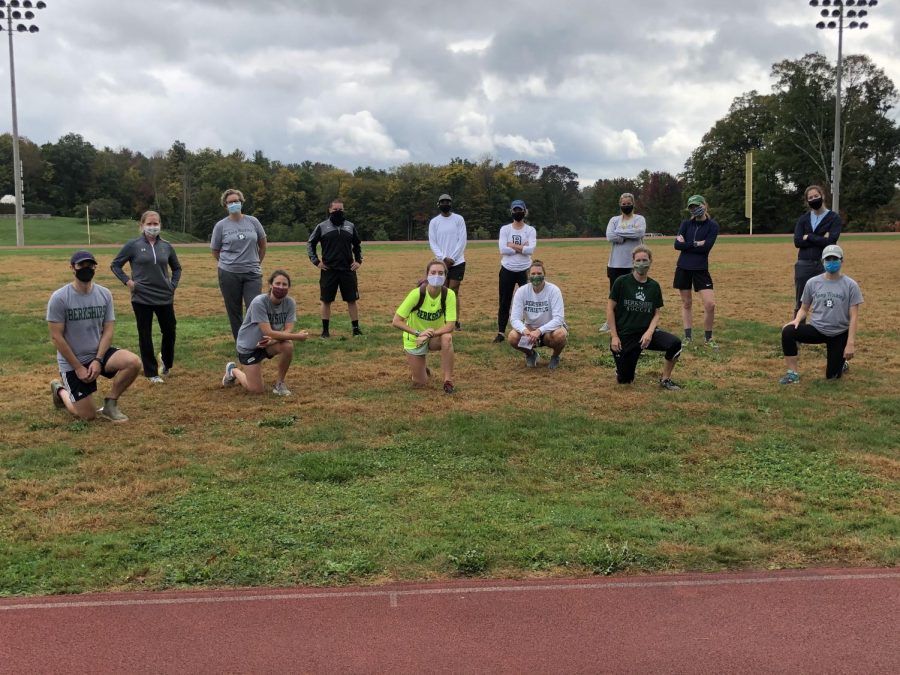 It’s hard not to notice the group of more than 70 female athletes working out, playing loud music, and cheering each other on every Monday and Thursday – which is exactly what the founders of BLAST want.

BLAST is a workout program designed for Berkshire’s female varsity athletes, created to challenge girls on campus, make them stronger, prevent injury, and foster an environment of athletes supporting other athletes. The coaches wanted to create space for female athletes to feel proud of who they are and what they can do.

It has been a huge collaborative effort between coaches of varsity teams at Berkshire, including Katherine Simmons, Lisa Marshall, Heidi Woodworth, Becky McCabe, Dory Driscoll, Britt Plante, and so many others. Coach Woodworth describes BLAST as a “team effort of a group of very dedicated coaches who saw an opportunity in this season to better serve their athletes. From the initial design of BLAST, through the planning of each session, there has been a collective group of coaches who are making it happen.”

All of the coaches were athletes themselves. Combined, they played 135 varsity high school seasons and 78 seasons of college athletics, captained 43 teams, won 16 league championships, completed 11 marathons, earned four college All-Americans, and one coach even played at the national level.

Their goal is to support and listen to female athletes. In the past, there has been what Coach Marshall described as a “tangible inequity” between girls’ and boys’ sports at Berkshire, and many girls have felt that they are not taken seriously as athletes, despite the large number of girls who play two or three varsity sports. The coaches wanted to figure out what Berkshire sports had been lacking in the past and find a way bridge that gap.

Coach Marshall explained that to her, it’s “the passing of responsibility. So much of why I came back to work at a boarding school is to not only identify what I did have and appreciate it, but also to identify what I didn’t have. And what we’re doing here is so much more than what I lived.” She wants to give athletes at Berkshire now what she didn’t have herself in high school and college.

Coach McCabe went to Berkshire herself, and she described wanting to give back after her time at Berkshire and offer the next generation of athletes those same opportunities she had. That includes the chance to be a mentor, like Sylvia Gappa was for her.

Coach Simmons related one experience that she thinks resonates with many female athletes: growing up “feeling like if I was as good as the boys, then that showed my worth, if I could keep up with the boys” But what she believes it should be is, “I want to keep up with the girls. I want the girls to set the standard.”

The highlight so far for Coach Marshall has been seeing athletes supporting each other. One moment in particular stood out: after a hard practice, BLAST was finishing up with some sprints, and “all of the girls were so tired but they were still cheering for each other to finish […] you can’t coach that, you can’t make them cheer, it’s something that you have to want to do. And in life, you need other people to pick you up and you need other women to empower you instead of breaking you down.” If one athlete gets stronger, everyone else does too; that’s where the BLAST motto “if she gets stronger, we get stronger” comes from.

Overall, BLAST has been a resounding success. Coach Woodworth hopes that the girls have learned “the value of creativity in the face of hardship, the importance of working together to accomplish goals, and the grit it shows to keep showing up to something even though you know it will challenge you.”

Thanks to the hard work of all of the coaches, Coach Woodworth says that Berkshire’s athletes “are getting faster and stronger, and are rewriting the narrative around female athletics at Berkshire.”