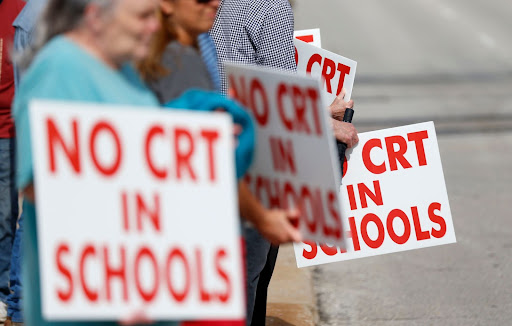 Critical Race Theory (CRT). You’ve heard these words spoken over and over again: on TV, in articles, in videos of school board meetings, even in political ads and campaigns. But what exactly is Critical Race Theory? The definition of Critical Race Theory is “an academic concept that is more than 40 years old. The core idea is that race is a social construct, and that racism is not merely the product of individual bias or prejudice, but also something embedded in legal systems and policies.” (Sawchuk) 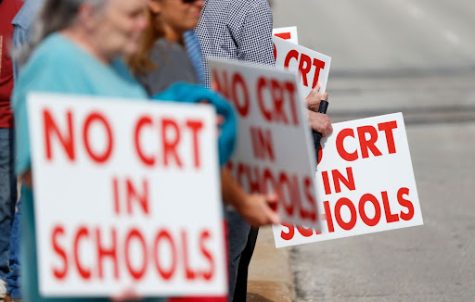 You might be wondering, why is this so controversial? The main issue that parents and school boards have with the idea of CRT is that children learn about it too young, and that white students will have self-deprecating thoughts towards themselves and their race. Both of these arguments can be debunked for different reasons. On the one hand, there is never an age limit for learning about race. Most non-white children and students experience racial bias and prejudice at a very young age, through unintentional name calling, and discrimination from their peers. Examples of this include students making unintentionally harmful observations about the color of their classmate’s skin, as well as continuing harmful stereotypes about race and ethnicity, from things they’ve heard from their parents and those around them. Because of these widespread misconceptions and incidents, it’s important to start debunking those myths and discriminatory messages before they begin, even at a young age.

Secondly, by white students and children understanding the power that their race held throughout history, and how previous generations used their race to change social and economic standings, we can raise a more just and equitable generation for the future. By understanding the generational power white people have had, they can understand how to make things more equal and fair and help those around them to learn too. Finally, if taught in a constructive and factual manner, no white student and child will have self-deprecating thoughts towards their race. It is important to understand that even though white people have had historical power, students themselves can end that and make a change.

One example of pushback to CRT in a community near Berkshire was Middlesex School, a boarding school located in Massachusetts. The creator of the 1619 project, Nikole Hannah-Jones, was invited to speak about the project during February of 2022, Black History Month. The 1619 project is focused on the history of slavery and racism in the United States, and how racism in policy and daily life disproportioantely affects Black Americans. After CRT became more mainstream, and was adopted as a war cry against Democrats by Republicans, Middlesex School abruptly cancelled Ms. Hannah-Jones’ talk without any reason or advanced notice. After asking for an explanation, this email was sent to Ms. Hannah-Jones from the colleague that invited her in the first place: “According to my head of school and board, the “noise” associated with having Nikole as the speaker would take away from the overall experience. I then suggested that Nikole be a featured speaker for our BIPOC alumni and was told ‘This is not the right thing for our community.’” (Hannah Jones)

Many teachers, parents, and students were alarmed by this messaging and students ended up not going to classes in protest. This resulted in the headmaster taking a leave of absence because of all the pushback he received, as reported by the Boston Globe. (Kaufman)

Even though talk about Critical Race Theory might be taking over the country and your TV, there really is no reason to be alarmed or disturbed about the contents of it. It is not a curriculum, it is simply a teaching of history that a vocal minority are against, because it paints the history of their race in a bad light. Even though that may be true, history isn’t supposed to be joyful and happy, it’s supposed to be true. That’s what most of the people against Critical Race Theory are fighting against. The truth.